Oh No My Dog Got Into The Garbage

Oh no, my dog got into the garbage!

There are many potential dangers involved with dietary indiscretion in dogs. Trash should be properly secured to ensure that pets are kept safe from harm. Toxins and poisons can be ingested and cause serious problems to dogs. Ingesting high fat foods that often discarded into the trash can lead to pancreatitis. The consumption of foreign objects can create foreign bodies and obstructions in dogs which can be very serious. Many of the objects found in garbage would not normally be consumed by dogs, but they are eaten because they are discarded along with food residues which attract pets. Objects such as dental floss, plastic bags, diapers, tampons, and the containers and wrappings found around meats, bones, and corn cobs are common foreign bodies that dogs consume and which subsequently require surgery in pets. There are also many foods that are toxic to dogs which can be inadvertently found in trash and eaten (chocolate, macadamia nuts, grapes, raisins to name a few) and also raw food that has been thrown into the trash can contain salmonella which will make your pet very ill. In any of these instances, contact pet poison control to discuss what your pet has ingested and the proper way to care for it. Additionally, Home Again microchip offers free pet poison control advice.

Princess presented as a second opinion for a non-healing wound in her groin region for a duration of several months. Multiple antibiotics were attempted without improvement. Princess came to IVC and we scheduled surgical exploration of the wound to potentially obtain cultures.  During surgery, Dr. Bart found a wooden foreign body deep in the center of the wound. As he traced the object he found it was a corn dog stick that had perforated the dog’s colon and migrated through the abdomen and skin to create the non-healing wound in her groin. 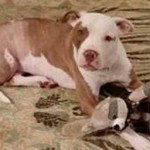 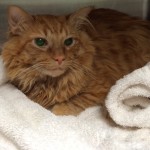