And It Stoned Me

Pacino, a 6 year old male neutered Pomeranian, presented to Independence Veterinary Clinic March 31st because his owner noticed blood in his urine, and he was having accidents in the home.  Pacino’s exam confirmed blood in his urine and an ultrasound exam indicated possible bladder stones but was not definitive.  Pacino began oral antibiotics and was scheduled for a re-check, including an ultrasound exam, in 14 days.

A follow-up with the owner April 4th revealed Pacino was no longer passing urine with visible blood and was doing much better overall.

A month later Pacino was examined due to his owner noticing a recurrence of blood in his urine.  An ultrasound exam showed a thickened bladder wall and the presence of several bladder stones.

A cystotomy (a surgery to remove the stones from the bladder) was performed May 20th.  More than 20 stones ranging in size from 1 mm to 7 mm were removed.  Analysis of the stones determined they were calcium oxalate stones.

Pacino recovered well from his surgery but will need to eat a special prescription diet for the remainder of his life.  This diet is used to reduce the chances of recurrence of bladder stones; however, calcium oxalate stones frequently recur.

Urolithiasis (having bladder stones) is a fairly common condition seen in both dogs and cats.  Factors contributing to this condition can include diet, physiologic abnormalities, and possibly a genetic predisposition in some patients.  Early detection usually results in the best treatment outcome.  Owners should carefully observe their pets’ bathroom habits as a first line of detecting a problem.  You should frequently watch your pet for blood in the urine, urinating more often, and/or straining while urinating.  Veterinary diagnostics would include a physical exam, labwork, an ultrasound exam, and radiographs (x-rays). 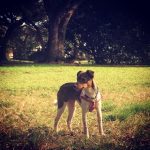